Allow me to state a fact: I hate zombies. I hate everything about them--their bad complexion, their disgusting diet, and their lack of social skills. So when I started seeing the reviews to this book, I was intrigued.  Things like "well written," "hilarious," and "not your typical zombie book" made me pick it up. When I found out the main character hated zombies, too, I read on.
We first meet Candace Marshall at a movie theater, ready to see the newest zombie movie. Only one problem: she doesn't like horror movies or zombies. Her horror movie-loving boyfriend Peter signed them up for a special screening as a birthday surprise. The only silver lining is when she spies her celebrity crush Gavin Bailey sitting at the front of the theater. Things go from bad (interactive zombie movie experience) to worse (boyfriend Peter dumps her. In public. On her birthday.)
Candace stomps out of the theater, determined not to cry over him. Despite her best attempts to put the whole disaster behind her, things don't get better. Peter was her ride into town, so she decides to walk. Then she loses her keys to some scary gang members. Gavin intervenes and offers to drive her home, but they become alarmed by a large convoy of medical vehicles heading towards the movie theater. They investigate only to discover the interactive zombie movie experience has become way more interactive than any audience member bargained for.
After Gavin and Candace escape, they begin to look for supplies, gas, and survivors.  When Candace is attacked, they find help with a group of survivors. They're searching for an unmarked military base where other survivors are supposed to gather. That's difficult due to the zombies. They're quite literally everywhere. 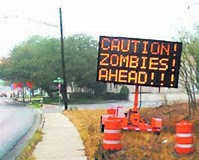 I was pleased at the low level of blood and gore in Zombie Takeover. There's a little; after all, it's a book about zombies. But there's not a lot of real estate devoted to it. A romance develops between Gavin and Candace, and I was pulling for them to make it work. After all, how often does someone get their celebrity crush? But I wanted it desperately for our heroine, especially after being dumped  by Peter in such a humiliating manner. The fact that Gavin's a sexy Scottish actor (think David Tennant) didn't hurt.
If you like plot twists, you'll love the ending. The author delivers a massive one very close to the end. I won't say more, because it's a doozy, and I don't want to ruin it for our readers.  So, I was pleasantly surprised by Zombie Takeover, as was my co-blogger Laurie Lucking (see her comments here).  I'll give it 4.5 (out of five) brains, uh, I mean stars.