We did an interview with Lauricia Matuska back when The Healer's Rune first released in early 2016. Then I had a chance to meet her at Realm Makers last summer, which was an absolute pleasure - she is generous, sweet, and a lot of fun. And this winter, I finally read my *autographed* copy of her book, and all I can say is, what took me so long?! 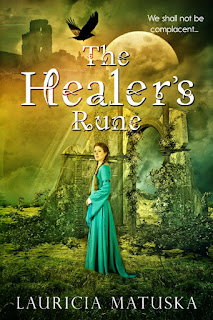 The Healer's Rune drew me in from the very first chapter with its beautiful language, intriguing world-building, and smart, compassionate protagonist. Sabine, a young healer, has long questioned the methods of the Ruddan, a race of elves who rule over humans with an iron fist. But when her friend is put to death and begs Sabine to seek the truth moments before her execution, the knowledge Sabine uncovers calls into question everything she's been taught about her country's history and the supposed extinction of other races. Under increasing scrutiny from the Ruddan, fearful neighbors, and even her sister, Sabine must decide who she wants to side with and how much she's willing to risk if she's going to take a stand against humanity's oppressors.

One of the things I loved most about The Healer's Rune was that it took the high tension and stakes of a dystopian and put them in a setting filled with cool fantasy world-building, which made the story unique and unpredictable. Sabine's role as a healer under the tyranny of the Ruddan forced her to make a number of nearly impossible decisions - What if you could save someone you've been instructed to let die, but it puts their entire family at risk? Do you have a responsibility to help someone who has been nothing but cruel to you? Would you snatch at your only chance for freedom if it may result in someone else's death? - which I thought were handled really well. And I appreciated that despite her dark, threatening surroundings, Sabine not only maintained her values and ideals, but also her sense of humor. The Healer's Rune is the first in a series, and I can't wait to keep reading as future books come out to find out more about the different races and the role of magic in Matuska's fantasy world.


Have you read The Healer's Rune? Can you think of other books that have a dystopian feel in a fantasy setting? What books have you read lately that featured great world-building?