Back in December, Erin did a fun twist on our usual "What We're Reading" posts to write about what she'd watched instead. Today I'm doing a different variation, which I'll call "What I'm Listening To."

Back before I had kids, I worked in downtown Minneapolis where the traffic is chaotic and parking is expensive. So most days I rode the bus. During that time I got really into audiobooks, because they were the perfect way to use my commute to enjoy literature (without feeling ill like when I try to read). But for some reason, after my oldest son was born, I just kind of forgot about audiobooks.

Until now. Recently I was fortunate enough to get two codes for free audiobooks from the amazing H.L. Burke, and it completely rekindled my love for them. While I don't ride the bus anymore, I have been listening during all my mindless chores - cooking, cleaning, laundry, etc. And the funniest part is, I've actually been seeking out more mindless chores to do so I can keep listening! Anyone who knows me can tell you that I typically avoid cleaning like the plague :)

Okay, enough about me! Let's talk about these wonderful audiobooks (which, as I mentioned, I received for free from the author)! 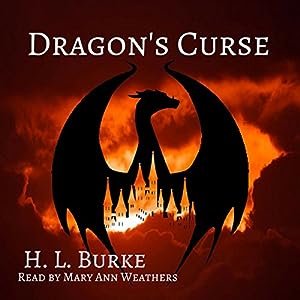 First, I listened to Dragon's Curse (Book 1 of The Dragon and the Scholar). I am so glad to have discovered H.L. Burke recently, because her stories are just SO my type of books! Humor, light fantasy, romance, adventure - everything I want in a fun, enjoyable read. In Dragon's Curse, Shannon has finished up her studies at the Academy and is ready to see more of the world. She talks her way into an assignment in the kingdom of Regone to heal the king from wounds resulting from a dragon hunt. While there, she learns the country's tragic history and the source of the king's desire for vengeance against all dragons. She also meets the local dragon, in an attempt to convince him to leave so that a certain burly knight (basically the Gaston of Regone) will quit threatening to slay the dragon in return for her hand in marriage. Instead of leaving, the dragon becomes Shannon's friend, intriguing her with his quick wit and love of books. Shannon's friendship with the dragon turns up more of the kingdom's complex past, secrets that must be unraveled before the true villain has the chance to bring their plotting full circle.

I really enjoyed the world-building in this book, complete with one of my new favorite literary dragon characters. Shannon was a fun protagonist, flawed but loyal to the core. The shifting relationships in the story kept me guessing, and I liked seeing Shannon and her Academy friend move beyond their comfort zones as scholars and exhibit spunk and courage, though there were a few times I thought they were a bit slow to figure things out. The narrator's style took a little getting used to, but once I was drawn into the story I thought she really did the book justice. I'll admit I found the ending pretty disappointing, up until I realized that this book is the first in a series! Now I can't wait to read the rest :) 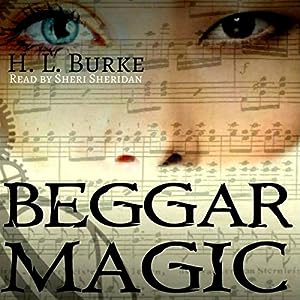 The other book I listened to was Beggar Magic, also by H.L. Burke. Leilani, a commoner, forms an unusual friendship with Zeb, a Highmost, due to their mutual reverence for the Strains, magic that flows through their land in the form of music or voices. Together Leilani and Zeb face the challenges of growing up and dealing with boys and career decisions, but their friendship truly gets tested when the Strains start disappearing and the responsible party is willing to kill to make their plan succeed. The girls must rely on each other and determine whom they can really trust before the Strains' beauty is weaponized or worse, vanishes forever.

It was fun watching the friendship develop between Leilani and Zeb over the course of the book, though the action was a little slow at first as they met and formed a basis for their relationship. I appreciated how realistic their squabbles were, especially when Leilani took a position working for Zeb that added extra tension. The love interests were sweet side plots but didn't take the spotlight from the girls' central friendship, and the mystery of the disappearing Strains was fascinating as it unfolded and various suspects were implicated or exonerated. At times the narrator's style fell a little flat for me, but I really liked the way she differentiated Leilani and Zeb's voices. What stood out to me most about this book was the world-building. The Strains were such a cool concept, playing a key role throughout the book, and it was interesting to see how they could be used and how the social classes formed around them. This was a stand-alone book, and I found the ending very satisfying :)


So there you have it! Do you listen to audiobooks? Have you read any books lately with noteworthy world-building (or cool dragons)?


P.S. Here are links to buy the books in ebook or paperback form: Dragon's Curse; Beggar Magic
Posted by Laurie Lucking at 4:00 AM