Get in Your Character's Head (Laurie)

I had the pleasure of attending the Realm Makers conference for Christian writers of speculative fiction this past July. It's an amazing conference, but I'm not going to go into detail in this post. If you want to know more, check out Elizabeth's post comparing Realm Makers and the ACFW conference, my overview on my website, or this post from the Realm Makers website. 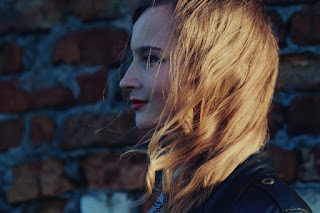 One of the speakers I was privileged to hear at Realm Makers was Thomas Locke. In one of his classes, he emphasized the importance of point of view, specifically that the POV character you choose for a particular scene should have a huge impact on how it's written.

I must admit, at first I wasn't too engrossed by what he was saying. In my current work-in-progress, the entire story is told from my main character's point of view in first-person narrative, so once that initial POV character was chosen, I was done.

But then he went on to say that the reader wants to make an emotional connection with the character, and thus the POV character's emotions should be infused into every aspect of a scene. Now I was listening. Especially when he went on to give a brilliant example, describing a woman entering a restaurant with one sentence from the POV of each member of a family. In those short sentences, I was already interested in and cared about the characters he had invented. 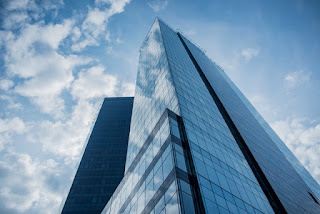 Unfortunately, I don't remember the specifics enough to recreate Thomas Locke's example. So I'll share my own--far less brilliant, but hopefully still illustrative. Imagine a bus full of people heading towards a city. They turn a corner, and an array of skyscrapers comes into view.

You could write a description of those skyscrapers that would paint a perfect portrait in your readers' eyes. But while such a visual may impress them, it's not likely to spark an emotional connection. What will really draw readers in is if they can see the buildings from your character's unique viewpoint. Every person on that bus sees the same skyscrapers, but no two will have the exact same reaction to them.

For one, the view may be mundane:
Skyscrapers dotted the horizon, their windows reflecting cold blue. This exact sight had passed before his eyes more times than he could count, the tall towers standing as sentinels for the bustling city. He straightened the newspaper in his lap and resumed reading.

For another, it may be stressful:
Skyscrapers in the distance drew her gaze. She jerked, nearly dotting her new jeans with spilled latte. What mountains of paperwork awaited her behind those lustrous exteriors? Her opportunity to "get away from it all" had been so short, and now "it all" was about to cast its long, lean shadow upon her once more.

Someone on the bus may have never seen skyscrapers before. They could be intimidating:
Were those buildings? He'd never seen anything half so tall. Every one was lined with window after window, climbing up to the sky. Someone sat behind each of those windows--someone with more experience, better connections, more knowledge of the world. What a joke, to think he could make it here, in this city already filled with thousands too many people. This city where the very architecture dwarfed his existence.

Or they might be exhilarating:
Skyscrapers, at last! How had she passed her entire life without seeing one? Now they stretched out across the horizon, enticing her with their sheer force, their new beginnings. The reflection of clear blue sky on each windowpane made them appear limitless. Just like her future, now that she'd finally made it out of that farm town and into the city. What wasn't possible in a place that could build such structures?

Integrate at least a hint of your POV character's reaction to what he or she sees, and suddenly you haven't just painted a picture, you've drawn a reader into a character's head and into your story.


So, what do you think? Do you enjoy experiencing sights, sounds, events, etc. as though you're right there in the character's head, or do you prefer some emotional distance from the story? What books stand out to you as doing an especially good job creating an emotional bond between the reader and a certain character?