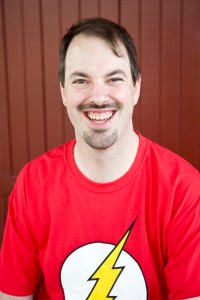 week! Author of the Failstate series and the Ministrix series, John

is also a pastor serving a congregation in Missouri.

stories a few months ago, at our local ACFW (American

Shortly after that meeting, I purchased Failstate and enjoyed it

immensely. Failstate is an anti-superhero

book written with a comic-book flair. You can read my review of the Failstate series here.

Let’s hear from John about his two series, as well as his books in the works!


1. Thank you for visiting, John! First, can you tell us a little bit about yourself?

Absolutely! I’m a Minnesota-transplant to the Kansas City area. I’m a colossal

geek, a father, husband, author, gamer, and child of God (but not necessarily in

2. When and why did you start writing?

I’ve been writing in some way, shape, or form pretty much as long as I can remember. When I was in

written novels. I’ve tried my hand at stage plays and screenplays. But I’ve

always come back to writing novels. There’s just something about writing a book

that resonates with me.

3. You recently moved from South Saint Paul, Minnesota (my hometown) to Blue

Springs, Missouri. What is the most striking difference between the two cities?

The heat! Seriously! My family moved in early February and, within the first week,

we hit 70 degrees! And for the past two weeks, we’ve had temperatures in the

high 90s. People keep telling me that this has been an unusually warm year,

which makes me all the more nervous as July and August are approaching.

Related to that, while we were moving, one of the local movers found my roof

rake in our garage. He asked if I ever worked with concrete. When I said it was

a roof rake, he wondered aloud if it was for scraping off shingles. When I

explained what it’s really used for, he looked so confused!

4. Do you have any tips on moving you could give our readers?

Don’t do it in winter if at all possible, especially if you’re moving to or from Minnesota. The last two

times my family has moved, it’s been in winter (once in December, and this last

time in February). I keep promising my wife we’ll never have to do that again,

but I’ve already broken my word once.

Ministrix books so far. You’ve submitted another book and are working on the outline

of yet another! Tell our readers a little bit about what they can expect from the

Failstate trilogy as well as the Ministrix series.

In Failstate, you can find the adventures of a teenage superhero who saves

the world in spite of his lunk of a big brother. With the Ministrix series, it’s

extremely legalistic and violent. The only alternative is an atheist regime

that’s hostile to all expressions of faith. The stories in that series are of

people who are caught between the two in some way.

6. When you think of all the characters you’ve written, is there one you like the best, or

one that you relate to the most? Why?


Probably the one I like best is Etzal’el from the Failstate series. I actually

into the series. He’s just a lot of fun. The one I relate to most, though, is

Failstate. I think I put a lot of myself into him when I created him as a

7. Besides being an author, you are also a pastor. How does being a

In some ways, it makes it difficult, simply from a time

management perspective. Being a pastor is not a 9-to- 5 type of job; it’s very

difficult to eke out the time I need to actually write. But it also gives me an

eye to eye with a lot of other denominations, so I’ve tried to bring a different

perspective to my stories.

8. Here at Lands Uncharted, we love Top 3 lists. Could you humor us and give us your

Okay: 3) The Star Wars universe. I’ve been a Star Wars fan for almost as long as I can remember,

and I would love to be able to visit that world for at least a little bit, preferably as a

Jedi (although not during the Clone Wars, for obvious reasons).

2) The Star Trek universe, mostly because I’ve always wanted to try out a holodeck and see

what it can do.

And finally, 1) Brandon Sanderson’s Mistborn world. If you

haven’t read these books, you absolutely should. Sanderson is a master at

fantasy worldbuilding, and it is so incredibly cool.

9. What is next for John Otte? Can you tell us a little bit about your current work in

Well, right now I’m kind of between projects. I’m waiting to hear from

my publisher about one idea and, while I’m waiting, I’m taking a stab at my first

fantasy novel (at least, my first in a while; it’s been ten years since I’ve tried

this). The story at my publisher is another Ministrix book and tells the story of a

universe. The one I’m working on right now is the story of a young woman

who’s part of an acting troupe and who desperately wants to be a hero, either on

stage or in real life.

10. Would you leave us with a favorite line or passage from one of your books?

Boy, that’s a tough one. But if I have to choose, I’d go with the opening lines of

Failstate: “Being a superhero was hard enough. Being one on reality television…

Why had I thought this was a good idea?”
Posted by Erin Hawley Cronin at 4:00 AM