Marriage on the Rocks (Elizabeth)

For my first Personal Note, I’m going to start with my parents’ story. Recently, they hit their 20th anniversary, and being both a romance writer and their daughter, I asked them how they’d first met. Their love story is the most exciting I’ve ever heard, and naturally it’s one of my favorites.

Before my dad met my mom, he was in a church service when he felt a strong impression that he would have five kids. At the time, he was 32 and single, with no potential prospects in sight… 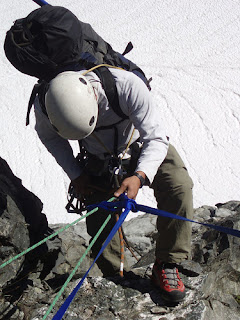 Two years later, my parents met rappelling off of a cliff face. They like to tell people that their marriage started “on the rocks.” Neither of them had intended to go that day. My mom had a college friend who’d invited her to go, but ended up canceling. After her friend cancelled, she considered cancelling too since she didn’t want to go with a group of strangers, but decided she might as well. My dad was experienced at rappelling, so he’d been invited to instruct a class with two other instructors. The class left an hour early without him. Since there were two instructors, he figured that they didn’t need him, so he began driving to a local lake to go sailing, but at an intersection decided to turn back and catch up with the group.
When my dad first saw my mom, he thought she was somebody’s teenager. She wasn’t wearing any makeup and had her hair in a ponytail. What caught his attention was that she was going down Aussie style. Normally, people like to back up before gradually descending down the cliff. Aussie style is where you walk face forward, so as you go down, you’re standing on the side of the cliff and facing the ground. My dad noticed that mom wasn’t going down tentatively, but was just having fun. Most people who do it are terrified and need lots of coaxing. My mom remembers that my dad was wearing a bandana that day and had kind brown eyes.
So after rappelling, everyone met up at a restaurant and many exchanged phone numbers. At the restaurant, my dad also made sure to talk about his Catamaran, in case mom might be interested. She was. He asked for my mom’s number, but when she gave it to him, he wrote down the wrong number because he was dehydrated. My mom thought he probably didn’t want her number after all, so she didn’t say anything. Luckily, a guy behind dad told him he wrote it down wrong, so dad re-wrote it.

They went rappelling together, sailing, and talked on the phone. Whenever my dad dropped my mom off at her apartment, they’d always linger in his car, talking, since neither wanted it to end. My mom was keeping a journal during this time. One entry read:
“I can communicate with him on a level I haven’t ever done with anyone else. I’m tremendously attracted to him and find myself thinking about us being together in the future. He is a wonderful person with whom I could and want to grow.”
My siblings all giggled when I read how mom was thinking about them being together in the future :)

But the story isn’t over yet. There was a problem. My mom and dad were both in the Air Force. My mom as an officer, and my dad was enlisted. Typically, officers aren’t allowed to date enlisted, because the officer will be biased towards the enlisted person they’re dating. It doesn’t work out well. But my parents were in a different chain of command. My mom would never have had to choose between my dad’s life and someone else’s. On top of this, my dad called the Judge Advocate General’s Corps (the legal arm of the Air Force) and asked about dating. They told him to be discreet, but otherwise that it was fine. And they were discreet. No one knew they were dating, until a Lieutenant was rifling through my dad’s desk drawer and found a photo of my mom in uniform.
After they were dating, the policy had changed when the Marines had court-martialed a married couple.
The Lieutenant took this information to the Judge Advocate General, and it looked like they were going to court-martial my mom, but dad reminded them that he’d called beforehand and gotten permission. For the next few months, my parents had to stop dating until dad could get out of the Air Force. The very day he was released, he and my mom attended the singles group together, where he gave his testimony before proposing in front of 300 people. The leader of their singles group was actually Craig Groeschel, now the pastor and founder of Life.Church (which is the church that created the YouVersion Bible App) and a New York Times Best-Selling Author. Fifteen days later, my parents were married. My mom was 25 years-old, and my dad was 34. Dad dropping out of the Air Force turned out to be a blessing in disguise, since he chose nursing anesthesia as an alternate career. And, as it turns out, five kids take a lot to feed ;)

Do you know how your parents met? What other love stories have you heard?

Elizabeth
http://www.elizabethnewsom.com
Posted by Elizabeth Newsom at 4:00 AM