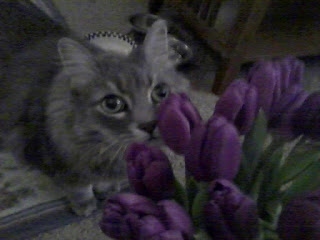 As many people do, I believe pets are family members. I brought my cat home for the first time eight years ago in April. She was almost four, and her name was Missy, though I think the shelter gave that to her. I called her Gretel because the swirled gray and cream colors on her tummy reminded me of the snow-capped Alps in "The Sound of Music," and I liked the name of the youngest von Trapp child. Sometimes I call my cat Miss Gretel as a hybrid of both of her names.


I have many goofy nicknames for her: Fluffers, Angel Bear, Pants--she is so furry, she looks like she is wearing MC Hammer pants.


But she was not always so fluffy.


The day I met her at the Humane Society, she was shaking and had fur piling out of her as if she were a little sheared lamb. I learned later the shedding was from stress. I had originally thought she was a short-haired cat because of the length of the fur around her face, but I could see the fur on her tail and back was very long. The long fur had just thinned out in other places, also due to stress.

She was trying so hard to be curious and sniff around despite her shaking that she completely melted me. I picked her up and put her on my lap and told the lady working there that I didn't know what to do with cats.

I think of that every day when Gretel gives me her ear for a scratch, then her chin then her snowy tummy, or now and then she even uses her front paws to pull my hand to her head. Subtle. She was like that right away, even though she had other challenges to overcome. 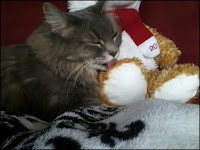 In her first days with me at home, she crawled along the floor on her tummy with her tail flat against the floor. With her awkward fur and low walk, she looked like some other kind of animal, not a cat. She sneezed blood, had eye discharge, and was so skinny as an adult cat that she could comfortably hang out in the three-inch space behind my cedar chest. She didn't know how to play with toys, and would get frustrated if I tried to pull one along the floor for her to chase. At first, I fed her kibble with my fingers, and later she would eat on her own only if I was sitting at her back. I
eventually got her two sets of food and water dishes to keep in our two different rooms because she would only eat in the room I was
in and I had been carrying her dish back and forth so she would keep eating.

I remember the first night that I heard a funny little snore come from her, and I knew she was happy and finally starting to relax and trust in the safety of her space. It took her about a year after that to develop a purr. It started as a small vibration I could see in her new fluffy cheeks or feel when I pressed my head to hers. Now she purrs so loudly that she sometimes sounds like a crackling campfire, keeping me warm and the room bright. 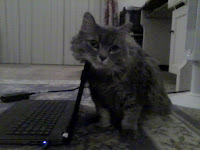 She watches movies with me, sits with me while I write, and when I get off the couch, she takes my seat. As I wrote my draft of this post on paper, she hovered over my pen, like a large, rumbling, furry pen decoration and occasionally licked the paper so that it was slightly damp. At times, when she is bathing herself, she stops to clean my hand like it is her kitten. There can be no closed doors in our apartment--when I shower, she is on the mat just outside, waiting for me to finish. As she eats or scrunches herself over her front feet so that the tufts of fur on her elbows flip out to show the cream color beneath, it looks like she has angel wings.

And each day that I start to leave the apartment for work, she goes straight to her food bowl because she knows I don't like to leave her back while she is eating.

She makes me laugh every day, softens me when I'm upset , and makes me a happier and better person. I don't know where she was before she came to me or what happened to her, but I sure am glad she's with me now. Miss Gretel. My Bear. I love her so much. 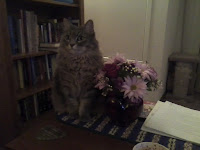 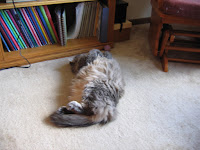