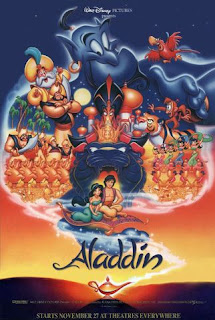 My family recently ordered this off of Netflix, and I was reminded of what an awesome movie this is. I love how Aladdin is a street rat that no one would look at twice—unless he happens to be stealing a loaf of bread—yet he has so much character. We see his unbelievable compassion when he offers his hard-stolen loaf of bread to a pair of orphans. We see his courage when he protects the same children from the whip of an aristocrat. We see his dreams when he stares at the palace in the distance, knowing he has the potential to be so much more.
And then there’s Jasmine, feisty and independent. She doesn’t want a man that will lavish her with luxury (she has plenty to go around), showcase his exorbitant wealth, or marvel at her beauty. She wants a man who will love her.

And, of course, who doesn’t love the flamboyant Genie? 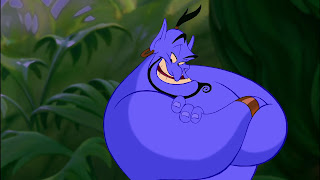 “Three wishes, to be exact. And ixnay on the wishing for more wishes. That's it. Three. Uno, dos, tres. No substitutions, exchanges or refunds.” 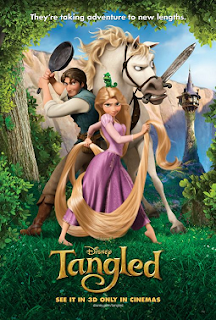 Not only is the story structure of Tangled practically perfect, but it has magic, romance, and a seventeen year-old longing for freedom. I can relate, Rapunzel. The foreshadowing was great—something I’d really like to emulate in my stories. The minor characters all had their own flare, especially Pascal and Maximus. 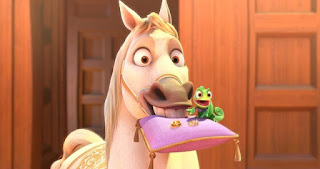 And the songs were so much fun. From the haunting tune of Rapunzel’s Flower Gleam and Glow song to the character-revealing Mother Knows Best to the fun and rather ironic I’ve Got a Dream.

Each song reveals a little more about the characters involved. And then there’s Flynn. 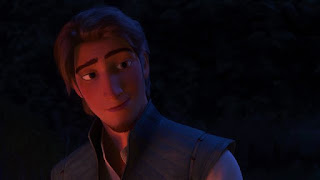 Dashing, handsome, and a scoundrel to the core. At first. His character development is so fun to watch. I especially love the montage in Corona, where they dance, read, and hide from soldiers while eating cupcakes. I mean, who wouldn’t want to do that with a cute guy? I wouldn’t mind! ;)
And then there’s Rapunzel. She’s like Aladdin, with big dreams, but no way to fulfill them—until Eugene Fitzherbert comes along… Hmm, I’m not completely sure if she had a positive character arc or a flat character arc. What do you guys thinks? 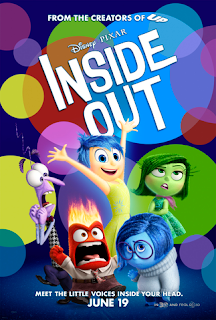 Oh, I really, really loved this movie. If I had participated in Best Movie of 2015 Poll, Inside Out would have been my #1 choice. It’s so ridiculously fun to watch the emotions run around inside Riley’s head. A recent bible study I read by Hannah Duggan (it’s not published yet, but it soon will be) mentioned how instead of emotions battling for control inside of us, it’s a battle between the mind, spirit, and flesh. As soon as her bible study, Dare Greatly, is published, I would highly recommend reading it.
I love how at the end of Inside Out, Joy realizes that the other emotions have their places too. It’s okay to be sad, angry, disgusted, and afraid. We all are at times. And watching the credits is so much fun. I love seeing the cat’s emotions and the bus driver!

Now, somewhere around this point, I would have had Beauty and the Beast, but Laurie snatched it first ;) Of course, I could’ve done it again, but I wanted this to be original. So, Beauty and the Beast gets an honorable mention. Frozen was a great animated movie as well. I really like Disney Princesses J

So, do you think Rapunzel had a positive or flat character arc? Which of the Disney princess movies are your favorites? And, if you didn’t get a chance during the last Top 3s Animated Movies post, what are your favorite animated movies?