As some of you may know, I am a huge fan of high fantasy, portal fantasy, and science fiction.  Anything that takes me out of this world and into an entirely new world is gold.  Well, not quite anything.  There are some important features that every great fantasy world incorporates. 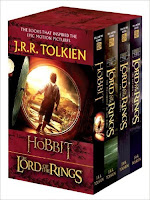 J.R.R. Tolkien is the author of The Hobbit, The Lord of the Rings trilogy, The Silmarillion, and many other books set in his fantasy world of Middle Earth.  He spent his life developing Middle Earth’s history, language, geography, inhabitants, culture, and more.  Thus, it is with good reason that so many fantasy readers and writers admire his work, and many fantasy elements that were first popularized by Tolkien (elves, dwarves, hobbits or Halflings, wizards, and many more) have become staples of the fantasy genre. In her What is Fantasy? post, Erin linked to this fantastic interactive map of Middle Earth, and I think it deserves being re-posted here.

Another one of my favorite fantasy worlds was developed by a more modern author: Tui T. Sutherland.  The Wings of Fire series was written for younger audiences (10-12) but I have enjoyed it immensely as a teenager.  The fast pace, complex plots, 3-dimensional characters, and (most of all) the detailed world make these books fantastic reads for anyone.  The land of Pyrrhia is populated and ruled by sentient dragons.  There are seven breeds or races of dragons, and each forms a tribe.  The tribes are organically different, from the SkyWing high culture on the mountaintops, to the lazy, carefree life of the RainWings deep in the rainforest, to the war-torn SandWings split between three heirs to the throne, and many more.

So, what do these and other great fantasy worlds have in common? (Warning: Spoilers for The Hobbit, The Lord of the Rings, and the Wings of Fire series)

1. An “otherworldliness” that intrigues readers

Would Lord of the Rings be half as interesting if it were set in our world?  Would it have worked as well if Tolkien had chosen real-world cultures, a real language, and a setting on earth for the Fellowship of the Ring to journey across?  I don’t think so.  So much of the fun of reading these books centered around getting to know the unique land of Middle Earth that Tolkien created.  Who doesn’t love his magical elves that live in trees, the strong, stocky dwarves that live underground, and the peaceful, food-loving hobbits that want nothing more than to spend the rest of their long lives in their homey hobbit holes?

I adore the Wings of Fire series for many reasons now, but what drew me to it originally?  The dragons. And not just the fact that there were dragons.  When I opened the first book and found a map and the guide to the seven different types of dragons, I knew it was a book I wanted to read.  And it hasn’t disappointed.  I loved reading about little Sunny, the dragonet who didn’t fit into any of the tribes.  She looked like a SandWing, but she was too dark and lacked the poisonous barb that characterized the others.  I was enthralled by the NightWing land and culture that was such a mystery throughout the story.  And I couldn’t tear my eyes away as scheming queens and ruthless “guardians” hunted and endangered the young dragonets on their journey across the beautiful and dangerous world of Pyrrhia.

This one goes almost without saying, but a great fantasy world has to make sense.  Once the “rules” of the world have been established, there has to be a very good reason to break them.  Magic systems in particular are notoriously difficult to keep straight.  A great writer will not only be able to keep the rules straight, but he will also be able to use the rules to create scenarios that would never be possible in the real world.

In The Hobbit, we find Gollum, who was once Smeagol, a hobbit.  The One Ring has corrupted him physically and mentally.  By the Lord of the Rings, Tolkien uses this same “rule” to create even more trouble for his characters.  It causes Boromir to attack Frodo, and Frodo himself succumbs to the ring more and more as he draws closer to its source.  Tolkien used his established rules to his advantage, and it made a much more interesting story.

In The Dragonet Prophecy, the first book in Wings of Fire, the dragonet Clay is established to have a special power.  It seems almost insignificant, since this power doesn’t show up again until it becomes the difference between life and death in the fourth and fifth books.

A world that is only skin deep will seem interesting at first, but will quickly fall flat.  A world that is deeply nuanced and complex will intrigue and delight readers for a long time.  Tolkien was a master of this.  You would be hard pressed to find a more complex and detailed world than Middle Earth.  With hundreds of years of history, well-developed languages that can be spoken and learned, and varied kingdoms and cultures, it would take a lifetime to learn everything there is to learn about Middle Earth.

Pyrrhia is also a very complex world.  The seven kingdoms are based in seven easily distinguishable regions.  They are distinct enough that kids can keep them straight and simple enough for kids to understand, but they are hardly shallow.  MudWings, the dragons that live in the Mud Kingdom, live in sibling groups.  When a clutch of dragonets hatch, they stick together and form a team for life.  The RainWings have several queens that rule for one month at a time.  The Sand Wings have three sisters competing for the throne, but they are hardly the only political powers in the area: the Outclaws control a valuable oasis and are ruled by a harsh but wise leader whose daughter disappeared many years ago.  In every book, the author gives us more and more of her amazingly detailed world.

4. A reflection of the real world

Although all of the “magic” of a fantasy world comes from the strangeness of it, it has to be grounded in reality.  After all, all good lies have an element of truth.  Every good fantasy is relatable in some way.  Tokien’s Middle Earth was based on Norse mythology, and many elements of Middle Earth reflect Tolkien’s every day life.  The hobbits, for example, had giant hairy feet, were half as tall as a man would be, and lived in homes with round doors.  They also loved food and tea, smoked pipes, and wrote books.  We can relate to the hobbits because they share some elements that we are familiar with.

At first glance, it seems that a world of dragons wouldn’t correspond to Earth at all.  Wings of Fire proves otherwise.  The kingdoms of Pyrrhia are ruled by queens who live in palaces, fight wars, and rule their people.  Brutal queens force captured enemies to fight in an arena, and benevolent queens take care of their people no matter what.  War destroys families and tears the land apart, but close friends learn to rely on each other and do whatever needs done to keep each other safe.  A fantastic story based in reality can dazzle readers with the exotic and comfort them with elements of home.

But a fantastic world alone isn’t sufficient.  Middle Earth wouldn’t have been the same without poor Bilbo being dragged on an adventure he didn’t want, or Legolas and Gimli who became unlikely friends.  The land of Pyrrhia itself may have been well-built, but the five dragonets, each from a different tribe, really bring the world to life.  Through them, we can experience the terror of a new and scary place, the wonder of a magnificent palace or landscape, and the joy of returning to a home you have always wanted.

Of course, fantasy and science fiction books are known for their intricate worlds and fantastic elements, but every story needs a good setting.  Whether you are writing about Middle Earth or a galaxy far, far away or your own hometown, be sure to keep in mind some of the essential elements of a great world.

If you are interested in reading The Hobbit, The Lord of the Rings, or the Wings of Fire series, the links are below:

The Hobbit
The Lord of the Rings trilogy
Wings of Fire book 1: The Dragonet Prophesy

Do you agree with these criteria?  What do you think makes a great fantasy world?  What are some of your favorite fantasy worlds from books and movies?  I would love to hear your thoughts in the comments below!